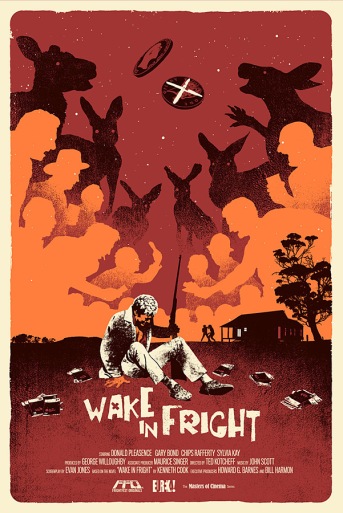 Wake In Fright has an odd air to it; it’s tense, dense, and… suspense-ful (had to work for that one). These descriptors are fitting for a film that almost had the only HD quality negatives destroyed because they were somehow thrown in a bin labeled “For Destruction” in a Pittsburgh warehouse sometime in the early 2000s.

After its initial release in 1971 to relatively small audiences in the UK and in Australia, the film was widely forgotten about and completely dismissed by the citizens of the outback because they felt that the film did not represent their way of life. This, coupled with the slaughter of what seemed like hundreds of live kangaroos, made the film less than palatable and the film vanished until 2004 when the aforementioned negatives were uncovered.

The movie focuses on a middle-school teacher’s vacation from a small, fictional town called Tiboonda. On his way to Sydney, a real city, he stops in yet another fictional town named Bundanyabba– colloquially known as the “Yabba.” His brief stop in the Yabba ends up costing him more than he initially thought as he bankrupts himself gambling, drinks himself into oblivion, and shacks up with a local that he met a seedy bar. From there, he continues to drink (a recurring theme) and ends up going on a live hunt for kangaroo. When he blacks out due to the alcohol, a opportunistic local takes advantage of him and pushes him to the brink. In the end, he heads back to Tiboonda, still a slave to the educational system and a completely changed man.

This is a film unlike many others, its closest kin being the 1972 film Deliverance. It makes a point to draw attention to the Australian societal dysfunctions that revolve solely around alcohol consumption. If someone offers you a drink, you take it, no questions asked. This is  juxtaposed with the idea that people are okay with slaughtering kangaroos, raping women, or men, and gambling, but denying a drink is off limits; something that the movie’s protagonist draws attention to while attempting to leave the Yabba.

Wake In Fright is shot beautifully with grand, sweeping shots of the Australian outback setting the scene. The acting, in general, is very solid and the characters seem like people you might know back home; Gary Bond as the film’s protagonist and Donald Pleasence as the voice of reason in the Yabba are particularly noteworthy. Nothing seems out of place, but some scenes could have been omitted or cut to keep the suspense and intrigue alive. Overall, this film comes highly recommended and instantly became a favorite in my book.