With their stock on the rise, Stir Crazy is the second film that Gene Wilder and Richard Pryor wrote and starred in together during their hot streak in the 70s and 80s. While this isn’t the best film of the bunch, that title is reserved for Silver Streak, which was released shortly before this, Stir Crazy does some things well and some things not-so-well. 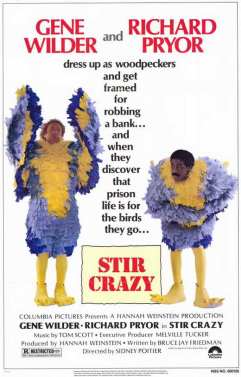 The plot focuses on two friends, Skip Donahue (Gene Wilder) and Harry Monroe (Richard Pryor). Skip and Harry are both fired from their jobs, which prompts them to advertise for a local bank in woodpecker suits– their song and dance being a great encapsulation of Wilder and Pryor’s dynamic. After they go on break, two thieves break in, steal their outfits, and rob the bank. When Skip and Harry return, they are promptly arrested in a classic mix-up.

The duo is sentenced to 120 years in prison (only 30 of which will be fully served, assures their lawyer). Upon their arrival in prison, they quickly make friends and settle in after a bit of discourse. The warden reviews their case, but also makes Skip ride a mechanical bull because this prison is rivals with a coterminous prison that they square off with once a year in a bull-riding competition. The prisoners are enlisted against their will.

It turns out that Skip is a natural, so he is chosen, but resists just long enough to make a few demands: a bigger cell and that his posse will be his crew for the event. The competition serves as a front for an elaborate escape plan where Skip and Harry’s crew break them out of prison and they all go their separate ways. In the end, it turns out that their lawyer got them acquitted, so none of that ended up being necessary.

Stir Crazy is a great example of why Wilder and Pryor were so successful– this film’s gross was only third to Star Wars Episode V and 9 to 5 that year. When the two are together and are allowed to be themselves, they are electric. It’s even more impressive when you consider that most of their scenes together are improvised.

The film falls apart when the two are separated and the focus shifts from their hi-jinks to Skip’s love interest. With such a powerful duo, why would you make Pryor play second fiddle for nearly half the film? And why interject a meaningless love story an hour in? These are just a few of the questions we had and you’ll probably feel the same.