I need to tell you something before we get too far into this review.

I have not read the Stephen King novel It.

Also, I haven’t watched the 1990 miniseries in full since I was but a wee lad– although I returned to watch a number of scenes on YouTube to refresh myself. It’s my opinion that reading source material should not be a necessity to enjoy a film, but, rather, knowing the source material should enhance your enjoyment of the cinematic interpretation– if it’s good, that is. 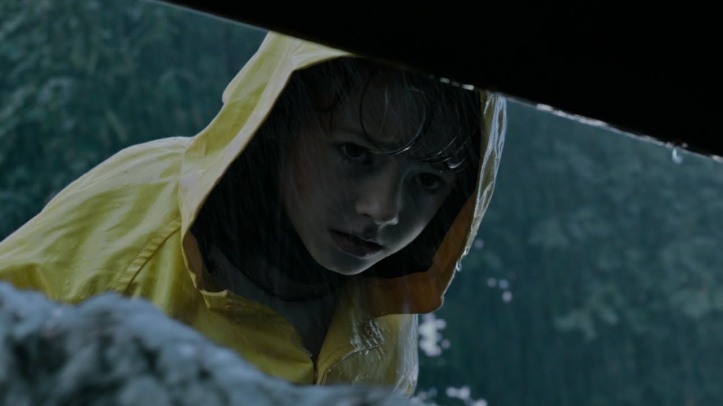 Okay, we’ve gotten that out of the way.

Despite my lack of preparedness, Andy Muschietti managed to craft a compelling piece of film that had me hooked from start to finish. It’s even more impressive when you take into account the tortured past that this iteration of the beloved Stephen King manuscript has endured. After cycling through three writers and two directors, we’re left with a unique property in the horror genre– one that takes itself seriously, but not too seriously, has a stellar cast of no-name teenage actors, and remains faithful to most of the source material.

The town of Derry, Maine, has a dark presence that has been looming over it for the greater part of a century; giant explosions and fires in the early 20th century wiped out a majority of the town and children go missing in droves over that course of time. More recently, in 1988 to be exact, another group of children suddenly vanish and our brave protagonist, Bill (Jaeden Lieberher), witnesses the loss first-hand after his younger brother disappears while playing with a toy boat in the rain. A year passes and there’s no sign of Bill’s brother, yet more and more children go missing. Bill and his friends begin to see visions of their worst fears and piece together that something sinister is the cause of the town’s ailments. The group, lovingly deemed The Losers Club, hunkers down, comes together despite adversity, and sets off to stop the evil entity behind the devastation. 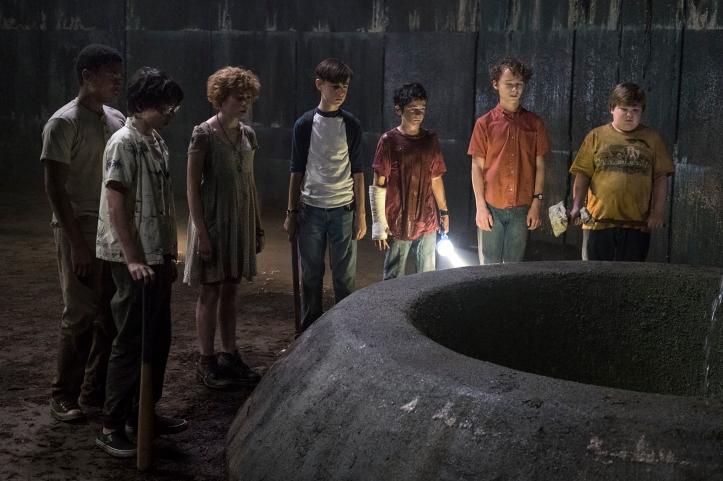 For those that are familiar with the source material, a 1986 novel by the same name, it will come as a surprise that the setting has been altered slightly. Instead of taking place in the late 1950s, the time period is actually shifted forward 30 years to the end of the 1980s. While some may find that off-putting, it’s really just clever marketing. IT appeals to a particular crowd– 80s kids. There’s a pop-culture appeal that made the 1990 miniseries a cult classic and those feelings have remained a part of those same kids all the way to where we stand now with a nostalgia-boom the likes of which we’ve never seen before. In all honesty, it does very little to the feel of the movie.

With such a large well to draw from, Stephen King’s novel is over 1,100 pages, it’s nearly impossible to create the kind of characterization that we’re used to in great cinema. Some of our protagonists only get one defining trait– their fear. To supplement the lack of character development, we’re treated to a number of “bonding” scenes between The Losers Club that work surprisingly well and, hopefully, make you feel for each character in a unique way; although it’s very clear that Bill, Ben (Jeremy Ray Taylor), and Beverly (Sophia Lillis) are our main focus and they happen to be fleshed out the most as well. Throw in some token friends, Richie (Finn Wolfhard) is a crowd favorite, acting as a comedic-release-valve, and you’ve got something special. It’s also worth mentioning that Andy Muschietti struck gold in the casting room, landing multiple stars in the making.

On the topic of performances, the debate will always boil down to whether or not Bill Skarsgard’s interpretation of Pennywise the Dancing Clown lives up to the defining performance by Tim Curry nearly 30 years ago. I don’t mean to ruffle any feathers, but I believe that Skarsgard not only filled the shoes of Curry, he actually broke through the sides and will need a new pair. His performance is incredibly nuanced, relying less on the by-the-book definition of a clown and taking a more intimidating and unpredictable approach. From his crooked eyes that were not created in post with CGI, the fact that he doesn’t blink once during the entire film, and his ability to drool buckets on command, Skarsgard manages to completely revamp the role and make him a more formidable presence.

There aren’t many glaring weaknesses in this film aside from the fact that it’s set-piece galore. More often than not, what would count as character development and intriguing story is often supplanted by a new location for these kids to be scared in. Because Muschietti decided to tell this story more linearly than the first, not having The Losers Club as adults, spliced into the middle of various scenes, we know that these kids are never in true peril. In the end, the momentum and overall atmosphere is impacted by Pennywise’s inability to ever make a true mark on the group. The formula goes like this:

Group of kids – one kid that gets lured aside by Pennywise + some spooky stuff that Pennywise does + the kids realizing that it’s not real and standing up to him = Pennywise has nothing to feed on and leaves to scare others and regain his strength.

IT is shattering box office records, so it’s going to be around for quite a while– make sure you see it in theaters because this is probably the first one that I’ll see twice in the same month.

Have you seen It? Leave your thoughts in the comments below!